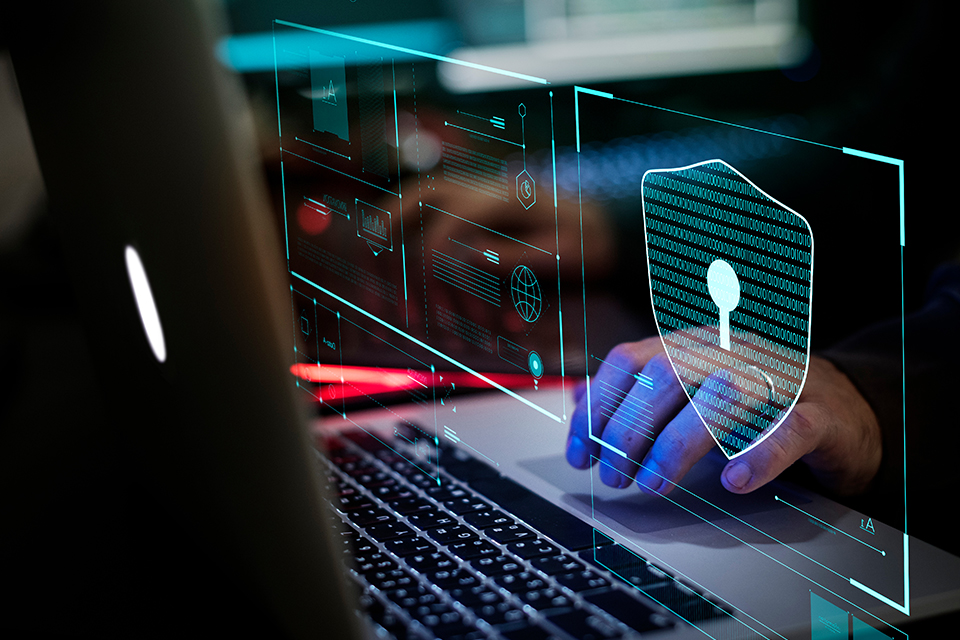 How to Combat Advertising Fraud in the APAC Region

What’s driving the increase in fraud in the region? And how can advertisers and publishers avoid getting pumped by the fraudsters? Let’s take a look.

Mobile phones have become our daily companions. We carry them with us every day, click them on in the morning to check what’s new, tap on their screens to play games on the go, message friends throughout the day, order anything from food to clothes at the press of a button and aimlessly scroll down as a way to wind down before bed.

So it shouldn’t be a huge surprise that mobile ad spend continues to soar. Statista forecasted that global mobile advertising hit $138bn in 2018 and bets that it is going to be even bigger by 2021.

In the APAC region alone, mobile ad fraud cost advertisers $34 billion in 2018. And worst of all, that figure is expected to grow to $56 billion by 2022, according to ad fraud specialist TrafficGuard.

But what’s driving the increase in fraud in the region? And how can advertisers and publishers avoid getting pumped by the fraudsters? Let’s take a look.

To start with, it’s worth taking a look at a report from TrafficGuard that shows how fraud is hitting the region.

According to their research, approximately one in 13 app installs generated in the APAC region in 2018 were not installs from genuine users.

And because fraudsters are using increasingly sophisticated techniques to evade detection and trick attribution platforms, it means that companies are paying for fraudulent activity across the region.

However, fraud does not occur evenly across the region. China, for example, is considered to be a hot-spot for ad fraud. In 2022, TrafficGuard predicts that advertisers and publishers will lose $19 billion to fraudsters in the country – creating challenges for advertisers looking to exploit the regions. 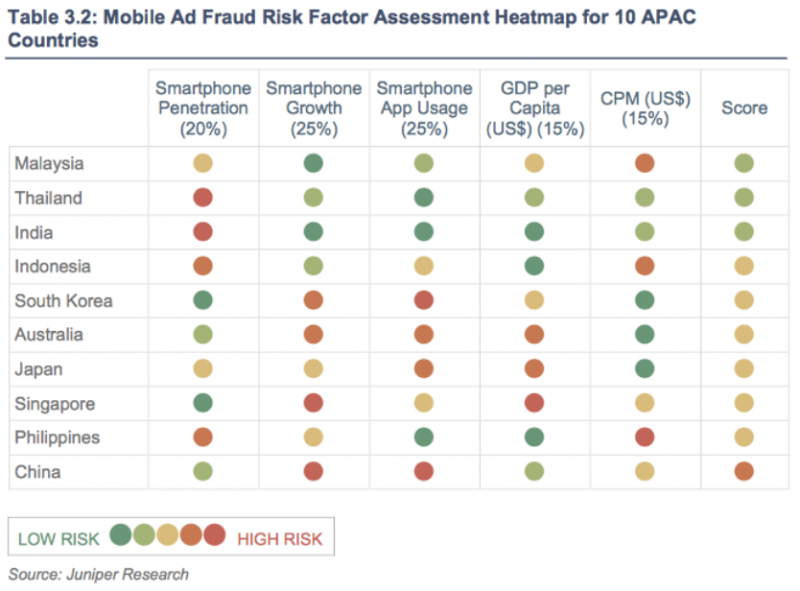 Furthermore, ad fraud is also higher in areas where users spend between three and five hours a day on apps, are particularly susceptible to advertising fraud. While China is one of those territories, South Korea, Japan, Australia and Indonesia also fit the bill and attract the wrong kind of attention.

Worryingly though, the report predicts fraudsters will be moving towards countries with high smartphone growth in order to exploit markets that have no detection methods.

An advertiser with no detection or protection in place who is running a $10 million advertising campaign will, on average, waste $2.6 million of this spend to fraudulent activities. 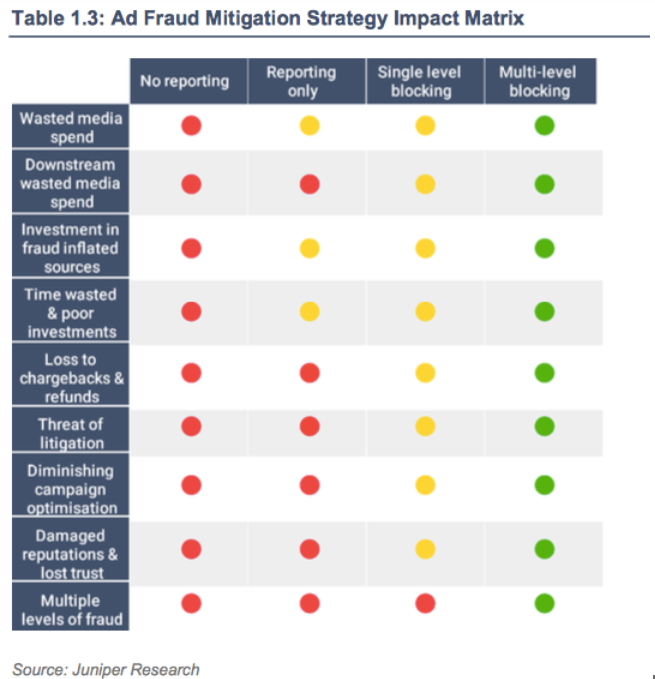 This makes markets like the Philippines and India potential risk areas for publishers and advertisers in the future if they don’t take the right steps to stop it in its tracks.

How to mitigate the impact of ad fraud

Stopping advertising fraud completely is hard. With scammers getting increasingly sophisticated, it’s impossible to suggest that ad fraud can be completely stopped in Asia. But there are ways for companies to mitigate the problems.

TrafficGuard’s first suggestion is to use multipoint fraud prevention to spot potentially fraudulent spend before money is in the account.

It enables real-time blocking of fraud before spend is attributed to incorrect sources. By analysing hundreds of fraud indicators per ad transaction as and when it happens and blocking invalid traffic as soon as it is detected, reduces the chance of fraud and improves campaign performance at the same time.

But there are other ways to lower your exposure to fraud. First, make sure you pick respected partners to advertise with. The fragmented nature of many mobile app landscapes in APAC makes it tempting to work with anyone who claims reach, but it’s better to limit partners to those who take anti-fraud seriously.

Additionally, it’s smart to find ways to measure that actions are taking place. In areas where you may be exposed to fraud, changing from paying per click or for a number of impressions to pay for conversions can resolve problems. It’s also worth working with third-party ad verification audit services to make sure that ads you pay for do get displayed.

Finally, companies will need to look to technology such as machine learning to take the fight to fraudsters in real time.

By leveraging AI to identify fraudulent activity in real time across millions of advertising interactions, it is possible for advertisers to begin to claw back cash from ad fraudsters with the help of technology. 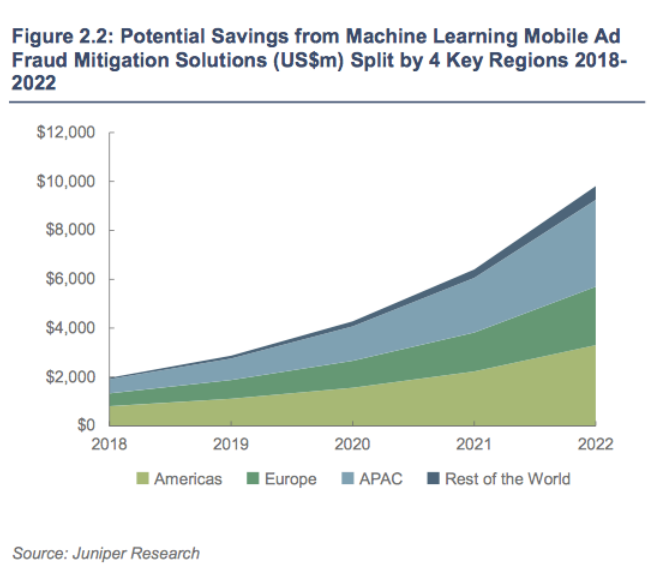 And as the technology develops, machine learning will allow businesses to tackle the global problem of ad fraud at scale – opening up the possibility of eradicating the majority of it within the coming years.

The truth is that there is no single approach that will kill off ad fraud . This means that the industry has to work together to solve the problem across the APAC region and beyond.

“Fraud is an expensive and growing problem for digital advertising and it calls for purpose-built protection,” says Luke Taylor, Chief Operations Officer and Founder of TrafficGuard. “That means not just reporting on fraud so that the advertiser can reclaim media spend, but proactively blocking invalid traffic and reporting mitigation to both the advertiser and their suppliers in real-time.”

Advertising fraud might seem like an inevitable consequence of working in the fast-moving, big data led mobile ad landscape. But it is not unbeatable.

By bringing every player in the ecosystem together, working to produce best practices for identifying and reporting fraud and leveraging technology like machine learning to fight fraud in real time, then its impact could be lessened significantly in Asia and beyond.