Fake App Installs Are Up 30% in 2018. Is Enough Being Done to Tackle Mobile App Fraud?

Mobile apps are the latest digital marketing channel and so have proven a tempting target for criminals. The good news is that app fraud can be avoided - if you know the signs

This is the year that many in mobile marketing agree has to be when mobile app fraud is tackled in earnest.

Recent findings from researchers suggest that fake app installations are up 30% on last year to represent around 11% of all installs. This app fraud was estimated to cost $800m globally in just the first quarter of this year alone. 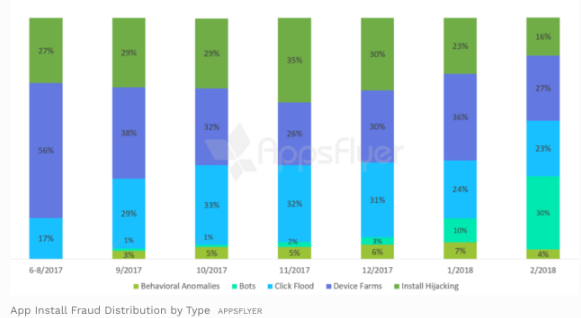 Many experts, then, are pointing to mobile app fraud as the channel that criminals have moved to because it is the latest opportunity where companies have yet to interrupt their activity as much as they have on the more established desktop and mobile web channels.

Mobile web fraud is down

On these channels, success is clearly evident, according to the latest figures from Integral Ad Science for the first half of 2018 in the UK (global figures are expected soon). When steps are taken to combat fraud less than half a percent of clicks are measured as fraudulent, compared to just over 7% for non-optimised campaigns.

In mobile web video, it is virtually the same story, but with non-optimised campaigns only seeing 5% fraud. The interesting point here is that, according to the figures, mobile is actually safer than desktop where protected display and video sees fraud of 0.7% and 1.4% respectively and unprotected inventory sees a rise to 10% and 8.6% 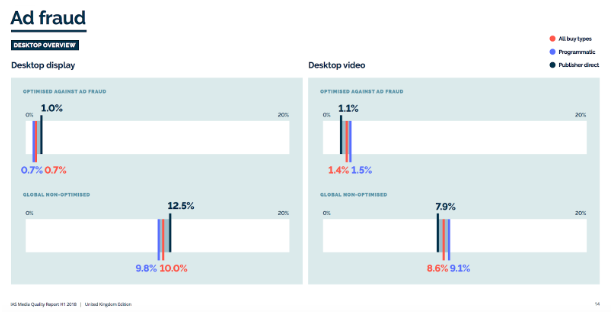 It is a similar story where more than two in three mobile web video units are viewable, compared to just under than figure on desktop. However, when it comes to display, viewability is a little better on desktop at 63%, compared to 57% for mobile.

However, where we see a drop is in the channel researchers are identifying as the most challenging – mobile apps. Here, viewability resembled the poor performance digital marketers had become used to with desktop and mobile web just a few years ago. Fewer than half – 48% – of mobile app units are viewable.

The feedback from IAS on why mobile apps are lagging behind on viewability is that it is a newer channel and so is expected to take a little longer to improve – just like other channels have.

However, there is also an interesting point that viewability is lagging behind because of the dominance of games as a channel for advertising. The researchers suggest this means adverts can be pre-loaded to appear at the end of a level or at the completion of a game. If that milestone is not reached, or the person switches off the game or screen rather than think ‘just one more go’, the advert can be fired off but then actually considered viewable.

Perhaps the most telling aspect is that Integral Ad Science does not yet measure app fraud because it believes more needs to be done by mobile publishers to roll out a common standard that would make fraud detection more reliable. The standard is there, it just needs to be adopted more widely.

This brings us back, then, to the point where mobile marketers who are launching apps or buying ad space within them can fall prey to accidentally wasting budget or becoming victims of outright fraud.

One article, penned from a Southeast Asia perspective, recently asking the question directly – if mobile app fraud was the new frontier in the fight against budget-sapping criminals, why hasn’t detection got better?

The answer is that it is difficult because the channel is new and the tools that are leading the fight on desktop and mobile web are not necessarily transferable. At the heart of the issue, the problem is that much of how fraudsters operate mimics natural behaviour, only on a grander scale and perpetrated by criminals rather than consumers.

Those that do mimic desktop techniques are the easiest to spot. Examples would include rogue mobile publishers stacking multiple ad units on top of each other, so one unit’s space is sold many times, as well as sending bot traffic to sites a consumer will never see.

Downloads no human will ever see

However, much of mobile app fraud is focussed on app downloads. A rogue operator will either download many apps on to multiple devices to claim a commission from the app marketer, or flood networks with clicks in the hope that some will fool an app marketer’s systems into thinking they were responsible for instigating a download and, again, earn a commission.

There are multiple techniques deployed and the end result is that marketers waste budget by paying criminals fees for downloads that they either had no part in instigating or were never going to be engaged with by a real consumer.

Mobile app marketers also suffer from skewed figures that would suggest their campaigns are doing better than they really are, leaving them to wonder why engagement and income remain low, despite so many installations? The crime can also make some sources of downloads look very tempting, because they have a high download rate, and prompt more budget to be spent on criminals.

The advice from mobile app fraud experts is that help is at hand and they are getting better at blocking known sources of fraudulent behaviour.

The main way fraud detection is working is to look at sources which have incredibly high conversion rates for downloads. This is a warning sign to begin with. So too are sources of traffic whose users show very low, or zero, engagement levels with the app that has been downloaded.

If you have a source of app downloads that have a very high conversion success rate and a very low engagement figure, then that really is a huge warning that criminals could be at work. The advice would obviously be to block those sources in the future or use a system that can automatically do this for you.