In just a few short years, Voodoo has released a string of hyper-casual hits. They’ve published more than 15 games which have reached the top 20 in the App Store charts since 2016, and seen such a meteoric rise to success that the studio name ‘Voodoo’ has almost become synonymous with the hyper-casual genre itself.

If you’ve paid any attention to the mobile gaming landscape over the past few years, you’ll have noticed some interesting shifts in the definitions of popular genres on the App Stores. Of these, one of the most talked about is the emergence of “hyper”-casual, a category of free to play mobile games which are typically quick to produce, played in short sessions with simple core loops, and primarily monetized with ads.

In just a few short years, Voodoo has released a string of hyper-casual hits. They’ve published more than 15 games which have reached the top 20 in the App Store charts since 2016, and seen such a meteoric rise to success that the studio name ‘Voodoo’ has almost become synonymous with the hyper-casual genre itself. Clearly their efficient, data driven strategy is working and fueling their success.

Topping all the charts

Speaking at Casual Connect Europe in London, CEO Alexandre Yazdi said that Voodoo was on track to reach 1 billion downloads for its games in 2018. He also commented that the Voodoo process is less of a secret and more of a “…mind-set, and a way of working.” Here’s a look at how this has translated to some of the publisher’s most popular titles.

Where it all began

Voodoo actually started off as a small team developing and releasing their own games. What originally began as a failed attempt to bring their titles Bool and Quiz Run to market set in motion a journey to hone the process of mobile games publishing. Using what they had learnt – tirelessly optimizing UA and monetization strategies – Voodoo adapted their approach and published Paper.io, which became their first major hit back in 2016.

Developers should focus on building games that people around the globe want to play, not just what appeals to them personally.

Speaking on the topic of breaking in games publishing, Hugo Peyron, Publishing Expert at Voodoo, says “it was a case of developing and fine-tuning their knowledge of user acquisition and on extracting value from users, simply in order to survive”. You can find out more about the early days of Voodoo in this interview from 2017.

These first few releases taught Voodoo two things. Firstly, that the most successful publishers need practical experience in many areas of game marketing. Secondly, if they really wanted to make the most of their knowledge of user acquisition and monetization, they would have to apply this to more titles than just their own.

A shift to publishing

Voodoo made the decision to shift their efforts and apply what they’d learnt to the wider market, leveraging their skill set to launch several games at any given time. In order to scale quickly, they wrote a script to scrape the Google Play store, allowing them to quickly compile the details of thousands of studios for outreach campaigns. 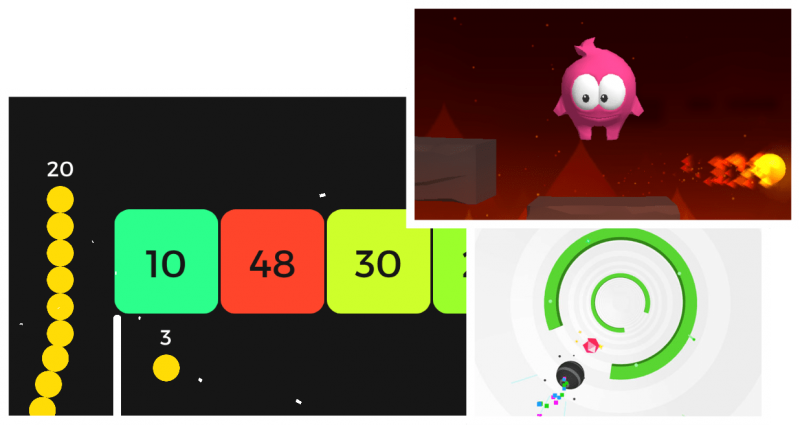 Some of Voodoo’s earlier hits from 2017: Snake VS Block, Stack Jump and Rolly Vortex (from left to right)

This efficient approach, combined with data collection and analysis using GameAnalytics, helped Voodoo to identify a new game called Fight List (based largely on its promising D1 and D7 KPIs). It quickly became a hit on the App Stores, reaching #1 position in more than 40 countries. The key takeaway here: Voodoo’s game adoption strategy streamlines the development and review process, whilst minimizing the commercial risk of launching several titles.

When it comes to predicting the success of a title, simply playing the game is rarely enough. Data is key for recognizing the games with the greatest potential, and Voodoo reviews this data with user-level access to multiple studios at any given time via GameAnalytics. They typically look for D1 retention of 50% or greater.

For us, a key benefit GameAnalytics offers is insights into the retention of studio partners. We look for the highest numbers possible. If a game has low retention, we will kill it.

Around 19/20 games with low retention get set aside, whilst studios with promising numbers and a great concept are given consultation to help improve core gameplay elements. Voodoo has now become a world leader at finding and refining diamonds in the rough, using GameAnalytics to see critical KPIs (and even game error logs).

Once a game has been released, GameAnalytics still plays a role in progress tracking for the entire Voodoo team, with custom integration via the GameAnalytics Rest APIthat feeds GameAnalytics data into their own proprietary dashboard.

Even more chart toppers from Voodoo: Knock Balls, Paper.io and TwistyRoad (from left to right)

Within this platform, product managers, game designers and even partner developers work together, using GameAnalytics as a way to regularly monitor and optimize the lifecycle of each and every game across their entire portfolio.

A word from Voodoo

“At Voodoo we review hundreds of games each month. Thanks to the data collected with GameAnalytics we’re able to help our partners with upcoming trends, clear creation guidelines, features to increase retention and a unique ideation process.”

“One of the great perks of working as a publisher is seeing how the titles of enthusiastic developers can be optimised to make a huge impact on their success. With the many different GameAnalytics SDKs and a custom API integration into our own platform, we can synchronise insights and feedback with our partners and streamline the consultancy process. Using data to make judgements and informed decisions has proved critical to our success.”