Genres, Brands and Features: All You Need to Know about The Chinese Mobile Games Market

Note: this post was originally published by Kalle Heikkinen, Chief Game Analyst at GameRefinery. With over 400 games analyzed under his belt, Kalle has a solid understanding of what works and what doesn’t in the mobile game market.

800 million mobile internet users, 550 million mobile gamers, 18 billion dollars of annual revenues – the Chinese mobile games market is like no other; attractive and unignorable. The market is a minefield of challenges as well though. From finding the right publishing partner to adjusting to the quirks of the Chinese government (we all remember what happened with approving new game licenses last year). With that said, it is more important than ever to know what the landscape of the world’s biggest mobile games market looks like.

Genres: is it all about MMORPGs? 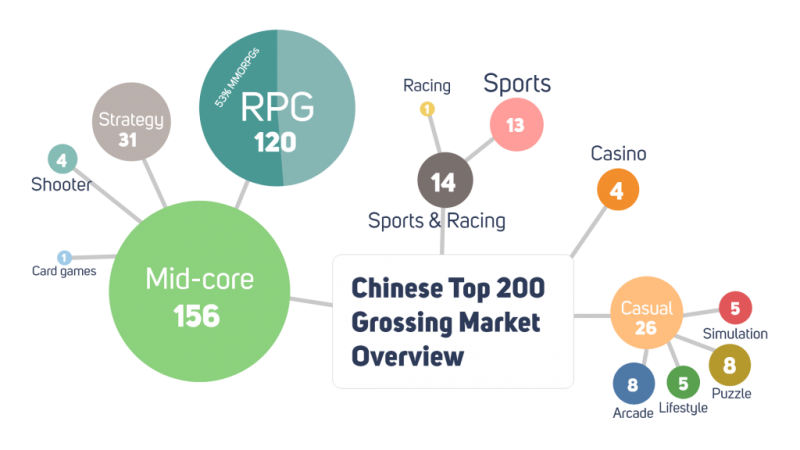 It is very much true that the Chinese mobile games market is heavily mid-core driven and the top grossing lists are exhaustedly packed with MMOs, leaving us wondering how there can be room to breathe for all these games.

With them playing such a significant role in the market, it is worth examining MMOs a bit closer. While a couple of successful MMOs we’ve seen in the West (such as Lineage 2) have mostly been Action RPGs with 3D graphics, an interesting characteristic of the Chinese mobile games market is the prevalence of 2D MMOs with a turn-based core layer. It should be stressed that these games are not a niche – some of them such as Fantasy Westward Journey have been able to sustain top 10 grossing positions for as long as we can remember. 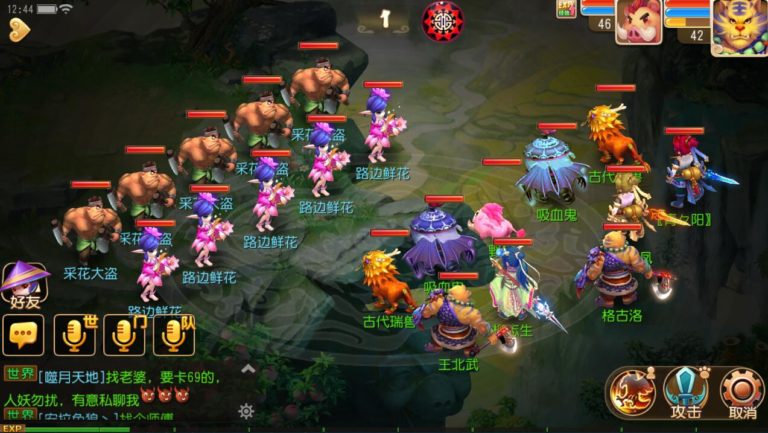 Fantasy Westward Journey uses a turn-based format in its core-layer.

However, recently we’ve seen quite a few surprising and innovative entrants in the Chinese top grossing lists including, for example, the post-apocalyptic survival game LifeAfter and sausage battle royale Sausage Man (yes, you read that right) from NetEase as well as the excellent endless runner Ninja Must Die 3, which has been a top 30 grossing title for the past 2 months. 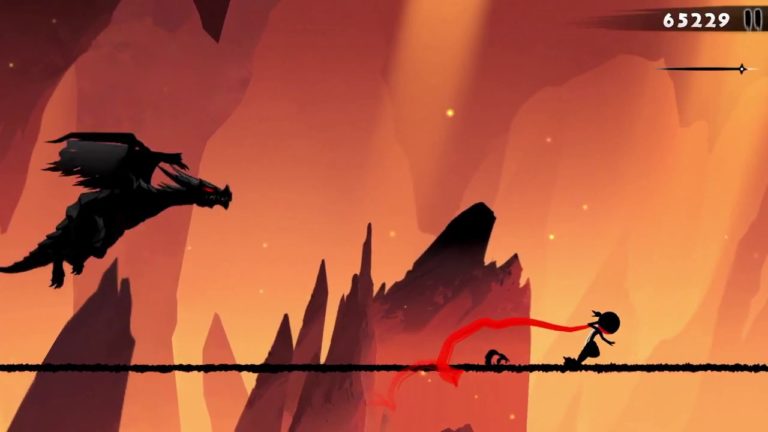 Another argument that one can make is that despite everyone raving about Honor of Kings and its incredible top-grossing run, the MOBA scene, in general, seems to be a tough one to enter. For example, NetEase has attempted several times to break into the genre with the popular Onmyoji brand as well as school-themed Inhuman Academy, but the results have been rather modest (at least when compared to Honor of Kings’ success).

Due to China’s restrictions and bans on console gaming along with piracy issues, (up until now) consoles never had a real chance to take off in China. PC, on the other hand, has thrived. The 2000s, in particular, were the golden era of internet cafe gaming. The heritage of PC gaming is clearly visible when taking a look at the mobile scene and the brands utilized there. 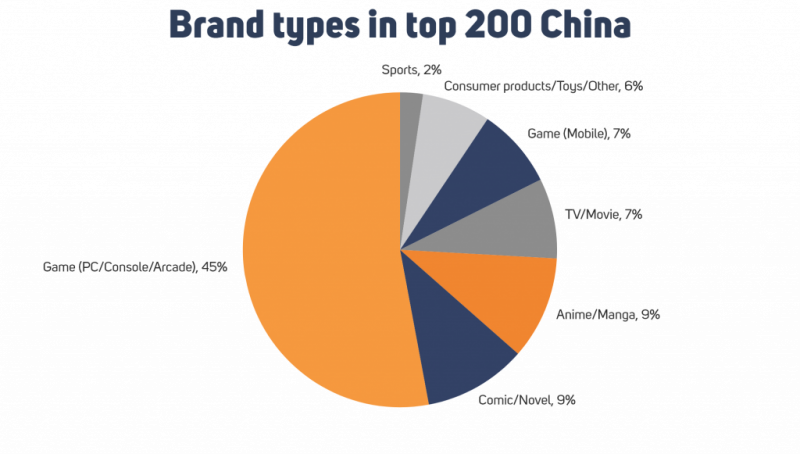 Games such as Fantasy Westward Journey (MMO), Ghost (MMO), CrossFire (FPS), FreeStyle (Basketball), and many others have their roots in PC and have been able to find success in mobile as well. Another fact worth noting is the high appeal of Japanese pop-culture, which is reflected by the relatively high number of anime-based games in the market. Successful examples include One Piece, Naruto and Dragon Ball Z. 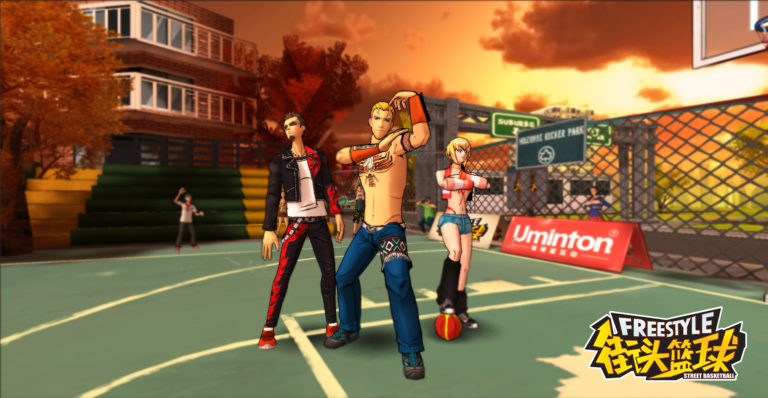 Finally, let’s take a deep dive into what GameRefinery loves the most: features. There are a couple of things they would like to highlight based on both their own experience from following the Chinese mobile games market for several years as well as their own data.

1. With Battle Royale gaining a foothold in China, Battle Pass is finding its way as well

The Chinese are masters in coming up with new innovative ways to monetize their games. Sometimes things go the other way around though as is the case with Battle Pass. Currently, the monetization tool is already found in all top 100 grossing Shooter and MOBA games in China. 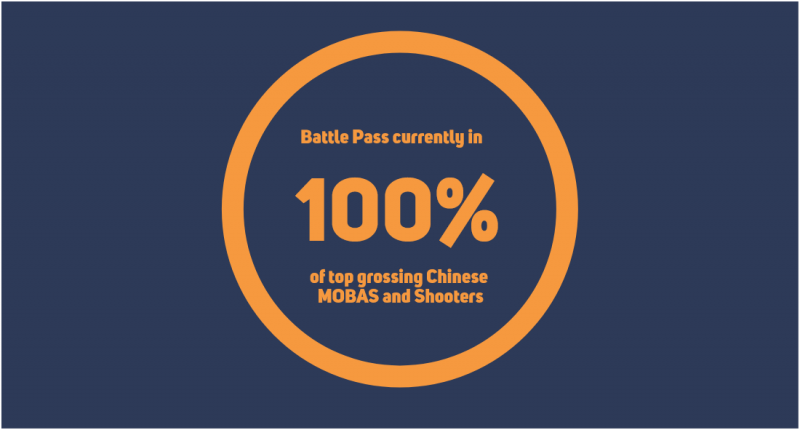 2. Untapped potential in Made in China features in Western markets?

Many studios use GameRefinery to make early discoveries of game features that are buzzing in Asian markets. Just consider how gachas took off in the West for instance. On that note, let’s compare how a selection of popular Chinese features have been utilized in the US and Japan compared to China.

While it is true that many of the features above are designed to support more aggressive monetization than what is to be expected in the West or Japan, it is still interesting to note the drastic differences between these markets.

3. Many top grossing games have a strong Japanese touch to them

China and Japan have a turbulent history with one another, but at least when it comes to mobile gaming, there seems to be no bad blood between the two. For example, a good number of top grossers in Japan are based on the Chinese “three-kingdoms” era while Japanese visual elements and game mechanics have largely influenced many top performers in China. Some examples of “Japanese” top grossers in China include Onmyoji, Azur Lane, Girl’s Frontline and Food Fantasy.

10% of top grossing games are “Japanese”

What makes these games “Japanese” is not their origin (Fate/Grand Order is the only game developed in Japan) or even the manga art style, but the fact that they heavily utilize certain features typically found in Japanese games, including gachas, and building up relationships with a game’s NPC characters. Interestingly, the default voice acting in these games is also almost always in Japanese, and in several cases, Chinese voice-overs have been left out altogether.

If we set our sights on the future of the Chinese market, there are a couple of things to look out for. First of all, will the MMO-market stay as fragmented as it has been thus far? Or could the market become more consolidated? What about the potential of foreign games, such as Brawl Stars, Fortnite and Pokemon Go, which are all still waiting to hit the market. Then there’s the Chinese government, which is known to be able to shake the market by stopping new games entering the market and practically blocking entire genres such as foreign casino games and AR, shutting down entire genres.

Anyhow, here’s a brief recap of the main points of this post: