Developers need to be aware of exactly what hurdles await and the lengthy process it takes to overcome obstacles of releasing games in China.

It’s no secret that for international publishers, releasing a game in China can be a big challenge.

It’s a lucrative market for those that can successfully launch a title in the country. The aim doesn’t need to be to top the charts either, a tough proposition given the major players like Tencent, NetEase and Happy Elements in the country.

Being lower down the rankings on the major app stores can still represent good value, depending on your objectives, and there are a plethora of stores and audiences to get your game in front of.

But developers need to be aware of exactly what hurdles await and the lengthy process it takes to overcome them.

In Mobvista and GameAnalytics’ ‘Looking East: How to launch mobile games in China 2018’ report, it’s noted that among the top 20 best-selling list on China’s App Store, 55 per cent of all apps have been released for more than a year, while 25 per cent came to market during the last six months. 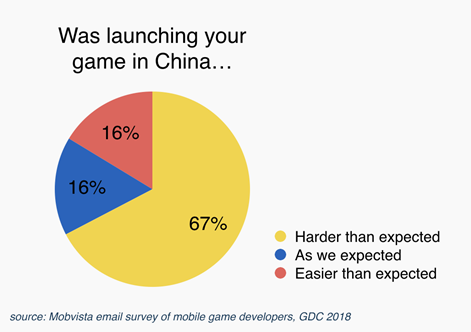 The toughest challenges of publishing in China were said to be regulation compliance (66.7 per cent) – developers must ensure their games aren’t overtly violent, for example – and localising the game sufficiently (66.7 per cent).

Other key challenges were language barriers (50 per cent) and gaining governmental approval (50 per cent) – the latter a requirement to launch in the country.

To help Western developers and publishers prepare for publishing in the Chinese market, Mobvista has put together eight tips for success.

For more information on successfully publishing your game in China, check out Mobvista and GameAnalytics ‘Looking East: How to launch mobile games in China 2018’ report here.

The report covers the makeup of the China market, how to enter it, marketing, monetisation, measuring performance, as well as insights into Chinese player behaviour.