Online content creator Marta Rosli Saragih got a surprise when she uploaded her tutorial on how to use the Chinese photo-editing app Meitu. It quickly became the most viewed video on her channel, which she started in May to teach photo-editing skills.

“The response was completely beyond my expectations,” said Saragih, 21, from Indonesia.

That level of surprise may have been unwarranted, however. After all, the Meitu app has been one of the most popular in China for image-editing over the past decade.

The company only began to focus on global expansion last year, with a keen eye on Southeast Asia.

Within a year, Meitu had taken the top spot in both Apple’s App Store and Google Play in six overseas markets. The company said that for a time it was also ahead of global apps such as video-streaming site YouTube, social media platform Instagram and messaging app Snapchat.

In addition to Meitu, other Chinese apps looking to emerging markets such as Southeast Asia have successfully taken the mobile internet market by storm.

In the first quarter of this year, TikTok, the overseas version of the short-video app Douyin, was the most downloaded on the App Store for the fifth consecutive quarter, overtaking YouTube and Instagram, according to the research company Sensor Tower.

Southeast Asia accounts for an estimated 190 million, or nearly 40 percent, of TikTok’s global users, according to a report in May by The Straits Times newspaper in Singapore, citing data from Sensor Tower.

Another Chinese short-video app, Like, was ranked among the top 10 in the Indonesia Play Store, according to a report in May by technology and business news portal KrASIA, citing data from mobile data and analytics service provider App Annie.

According to a survey by the global management consultancy McKinsey & Co in 2016, JOOX, a music streaming service owned by Chinese internet giant Tencent, was the top music app in Thailand, Malaysia and Indonesia.

In China, Meitu is popular for its powerful editing tools. Many young Chinese women use it to enhance their looks by giving themselves a narrower chin, bigger eyes, whiter skin — even longer legs.

When its other apps such as BeautyCam and Meipai are included, the Meitu company has more than 332 million monthly active users and an estimated value in the billions of dollars. The company launched the BeautyPlus and AirBrush platforms in overseas markets ahead of the Meitu app.

In January 2017, after the “hand-drawn selfie” function was launched, the Meitu app gained popularity in the West when edited pictures of public figures such as Facebook founder Mark Zuckerberg, Amazon chief Jeff Bezos and SpaceX founder Elon Musk went viral on social media. In just three months, the function was used more than 520 million times globally.

Maggie Ke, regional marketing head for the Meitu app, said: “This popularity was purely because the users were keen on it, taking our ranking at the time from below 900 to the top 30 in the US App Store.”

It gave the company a lot of confidence that the app could be as popular overseas as it had been in China, she added.

During Spring Festival this year, the app became a hit in Southeast Asia by offering a personalized anime avatar feature. The biggest increases in the number of daily active users were in Malaysia, Vietnam and Singapore, with growth rates reaching 50 percent, 44 percent and 28 percent, respectively, according to the company. 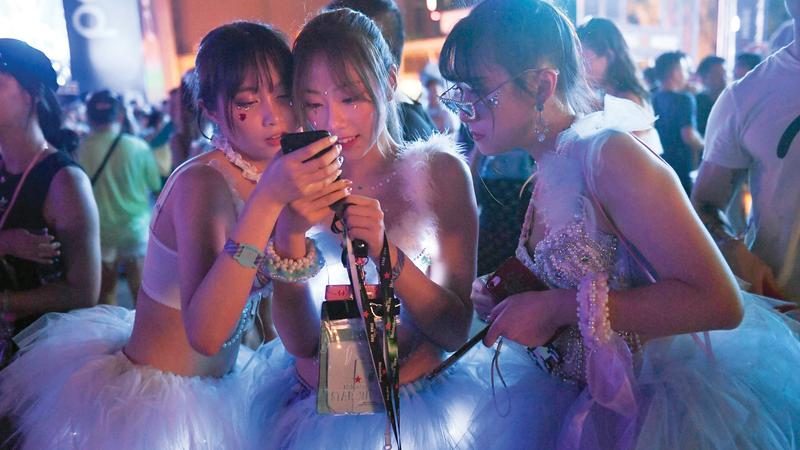 On April 13, during the annual Songkran, or Thai New Year, celebrations, revelers at the S20 Songkran Music Festival in Bangkok check a mobile phone. (Lillian SUWANRUMPHA / FOR CHINA DAILY)

As a first-time user of the app, Natasha Pangilinan, 21, an office worker in Manila, capital of the Philippines, found it interesting and efficient. “It offers many ‘presets’ and I don’t need to adjust the settings,” she said. “I like not having to figure out anything else (about how to use the app).

“Everyone wants to look good on social media platforms,” she added.

Although not a regular user of photo-editing apps, Pangilinan still spends about five minutes adding filters and effects before sharing a picture online. “People in the Philippines like taking selfies, and the Meitu app can be helpful in producing more appealing photos,” she said.

The Chinese file-sharing tool SHAREit illustrates the popularity of an app in providing the right service to solve difficult market problems.

Within about a year of its launch in 2015, it had attracted more than 870 million users worldwide. Always in the top 10 of Google Play’s most downloaded apps, SHAREit today has over 1.8 billion users.

Jason Wang, chief business officer for SHAREit, said: “At the beginning of 2015, we found hundreds of thousands of new users joining from India and other countries every day, but we didn’t have any local staff and didn’t spend a penny on marketing.”

After conducting field research in India, the company was surprised to find that many people, from taxi drivers to students, were using the app spontaneously.

Wang added that smartphone sales representatives would even help customers download SHAREit to transfer commonly used apps, videos and music, as well as recommend to friends and relatives that the app does not require mobile data to transfer photos and music.

In India and Indonesia last year, SHAREit was the fifth most downloaded app on the App Store and Google Play. The combined number of users in these two markets alone exceeds 600 million, according to the company.

Content creator Doni Agung Nugroho operates a YouTube channel in Indonesia to share information about internet marketing and tutorials for mobile apps, including SHAREit. He said he first heard about this app through advertisements and found it easy to transfer files between different devices.

“I like the speed of the app,” said Nugroho, who hopes the SHAREit download size can be reduced to allow more room for his phone’s memory storage.

Cao Xiaohuan, co-founder and president of Mobvista, a leading Chinese mobile marketing platform, said the trend of domestically produced apps expanding globally can be traced back to 2010. It was mainly led by tools and utility apps that were accepted by users from a range of cultural backgrounds.

Cao cited UC Browser, a web browser owned by tech giant Alibaba, as an example, and said that because of its smaller app download size, it is more suitable for lower-end smartphones.

In less than two years after its global launch in 2009, UC Browser had gained a considerable chunk of the market in Southeast Asia, as well as in India, where it was once the country’s No 2 browser, behind Google Chrome.

Echoing Cao’s view, Meitu’s Ke said the Meitu app faces fewer cultural barriers than others because many people just want an easy-to-use platform to edit and beautify their photos. “But we also adopt a localized and refined way of operation (to meet beauty demands in different markets),” she said.

“For example, young women in Thailand prefer to edit their photos in a more creative way to show their personalities, such as using a special filter or frame,” Ke said, adding that local teams and partnerships have been established to ensure local tastes are being catered to.

Campaigns have also been launched for local events, including Songkran, the festival marking the start of the traditional Thai New Year, and Ramadan, the Muslim fasting month, which is observed widely in Southeast Asia.

Izabel Cortez, a cosplayer from the Philippines living in the United States, was introduced to Meitu a year ago by a friend.

“Photo editing is important to further enhance pictures, including adjustments to color, brightness, hue and saturation, especially if the photo was not taken in very good conditions,” Cortez said, adding that stickers and filters can also make a photo more appealing. “I like how it can animate the photo’s background and turn it into a video. It’s really cool and fun,” she said.

Cao said in recent years Chinese apps across all categories have made huge advances in Southeast Asia and beyond, adding that platforms like TikTok have introduced innovative ways to share user content.

In the gaming category, domestic internet companies Tencent and NetEase ranked first and second in annual account revenue on both the App Store and Google Play last year, according to mobile data company App Annie.

SHAREit’s Wang said: “With a huge population base, rapid economic development and a relatively less-developed internet environment, what is happening in emerging markets now is very similar to how China was a few years ago, which creates many possibilities for the success of Chinese companies going global.”

Cao said localization remains a major challenge for Chinese app developers in Southeast Asia, adding that companies must be patient and persistent to tackle challenges, while focusing on the basics of their products and business operations.

Wang said app companies need to be vigilant over issues such as religious sensitivity and copyright compliance by developing customized policies and multicultural teams.

As for SHAREit, in addition to having a team in India, it cooperates with local platforms to match content with the right users through big data analysis and artificial intelligence.

Ke, from Meitu, said the app will focus more on post-production for videos, as there is solid demand in Southeast Asia. Another key focus will be considering internet infrastructure across the region to provide a smooth photo-editing experience.

“We are not afraid of competition. We have a huge tech team with more than 10 years’ experience, so we are really confident in our technological capability,” Ke said.

In April, the Meitu Imaging and Vision Lab won first place in the Image Enhancement Challenge at the 2019 New Trends in Image Restoration and Enhancement conference, a global event representing the best in digital image restoration and enhancement.

Saragih, the Indonesian video creator, said: “The Meitu app is really good, and I have never found one like this before. In the future, I will make more tutorials about using this app.” 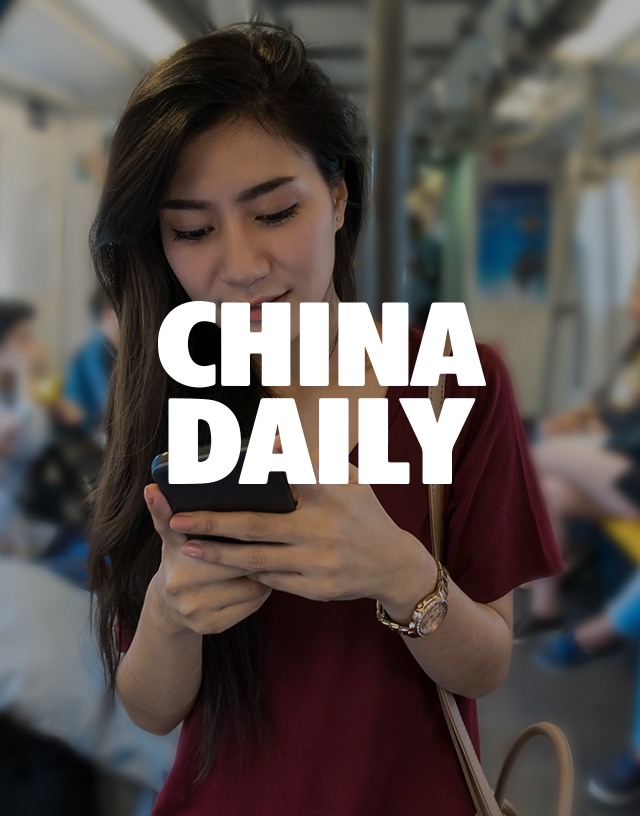