Mobvista became one of the Top App Marketing Services 2015

Mobvista was recognized as one of the Top App Marketing Services 2015, as it successfully helps to achieve common app developers’ goals, namely, to grow the app user base, to solve the app discovery problem, and to reach the target audience.

According to the recent Mobyaffiliates’ ranking, Mobvista was recognized as one of the Top App Marketing Services 2015, as it successfully helps to achieve common app developers’ goals, namely, to grow the app user base, to solve the app discovery problem, and to reach the target audience.

As it is said in the report, with the current state of the app industry, app developers “are ought to be concerned with the right strategy for app user acquisition and associated user acquisition costs”, that are fluctuating with a tendency to rise.

The Fiksu CPI Index, which measures the cost per app install directly attributed to advertising, demonstrates that in September of 2015 CPI was $1,53 per install for iOS apps and $1,88 per install for Android apps, 15% increase and 2% decrease respectively since August of this year. The factors that influence CPI are new smartphones or tablet hardware releases, seasonal effect (holidays, vacation periods and so on) and tough advertisers’ competition.

Making mistakes with app user acquisition strategy costs companies a fortune and ultimately halt their growth. With 10,000+ traffic sources, 240+ countries geo targeting, SNS support (Facebook and Twitter), Google AdWords and video ads on YouTube, operating on iOS and Android, Windows Phone, Blackberry, Mobvista is one of the platforms that excel at finding the right strategy to connect apps with the right audiences, figuring out an optimal user acquisition cost, and power the app user acquisition efforts.

Starting operation in March 2013, Mobvista runs a global mobile digital marketing platform covering over 240 countries with over 10 billion daily impressions, and an overseas mobile game publishing platform. It also owns a user database covering over 2 billion devices and 2000+ user targeting labels. Its major customers include some of the world-leading enterprises such as Baidu, Alibaba, 360, Uber, King, Flipkart, etc.

In 2015, Mobvista established strategic cooperative relations with Google AdWords, Twitter and Facebook, the world’s top3 mobile platforms. In Android Performance Index for e-Commerce, Travel and Utility Apps released by AppsFlyer, a mobile advertising tracking platform, Mobvista ranks the second right after Facebook. In Android Gaming Performance Index, it was the third after Facebook and Chartboost. Besides, Mobvista tops in Asia for both rankings mentioned above. 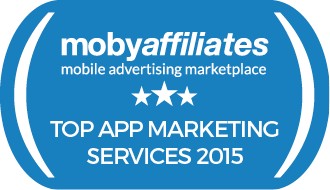