Mobvista was recognized one of Top App Monetization Platforms 2015

One of the Mobvista competitive advantages is the ability to host and serve ads to own apps using own inventory.

Mobvista was included into the list of the best app monetisation solution providers 2015, according to the AppIndex.

According to recent estimates, there are about 9 million mobile app developers in the world (although ~35% of them consider it as a hobby) but, as VisionMobile points out, about 60% of these people make $500 or less profit a month on apps they develop.

People who are in app business to make money can choose from several options to earn a profit. The two major options are – either to profit on paid downloads and in-app purchases or monetize apps via advertising.

The essence of advertising in apps comes down to placing a banner or video ad of an app inside another app. Just like with the web, there is a banner blindness problem for banners in apps as well, app users either ignore banners or get irritated by them and it degrades their app using experience. This is the problem that all companies, that provide app monetization via advertising, do face. These companies potential to help app developers to monetize their apps is significantly depends on how effectively they can address banner blindness.

Being one of the top app monetization solution providers, Mobvista may help to earn a profit via advertising. As highlighted in the report, one of the Mobvista competitive advantages is the ability to host and serve ads to own apps using own inventory. The company’s M System platform allows app developers to build their own customized monetization system, with custom ad format and launch campaigns from third party networks. The platform allows to set up offers from direct advertisers with specific ad formats, billing type, frequency cap.

Launched in March 2013, Mobvista runs a global mobile digital marketing platform covering over 240 countries with over 10 billion daily impressions, and an overseas mobile game publishing platform. It also owns a user database covering over 2 billion devices and 2000+ user targeting labels. Its major customers include some of the world-leading enterprises such as Baidu, Alibaba, 360, Uber, King, Flipkart, etc.

In 2015, Mobvista established strategic cooperative relations with Google AdWords, Twitter and Facebook, the world’s top3 mobile platforms. In Android Performance Index for e-Commerce, Travel and Utility Apps released by AppsFlyer, a mobile advertising tracking platform, Mobvista ranks the second right after Facebook. In Android Gaming Performance Index, it was the third after Facebook and Chartboost. Besides, Mobvista tops in Asia for both rankings mentioned above.

In November 2015 Mobvista announced its listing on a national securities trading venue in China, National Equities Exchange and Quotations (NEEQ) under the code “834299″. 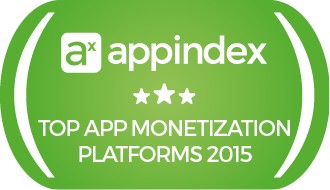