If the headlines (and headline numbers) are to be believed, mobile games have a new, all-conquering genre – the battle royale game.

In fact, for the first time we don’t just have a record-breaking mobile game, but a truly cross-platform phenomenon.

The last time gamers on PC and mobile had a shared obsession, it was probably Farmville. But today we have ringside seats to see which battle royale game will be the last one standing.

For American or European gamers, you can be excused for thinking that the choice is between playing Fortnite or PUBG.

But as we’ll see, Asia has already seen a slew of similar games launch in the past eight or nine months, with few of them – with the exception of PUBG – making much headway in the West. Now, all eyes are on Fortnite, to see if it can repeat its incredible growth in arguably the home of the battle royale game – China. 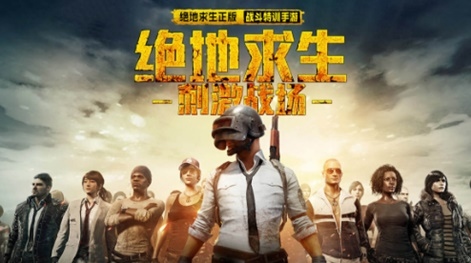 The genesis of battle royale games on mobile came with the initial launch of PUBG for PC in November 2017 by Korean studio Bluehole, with investment and marketing support from China’s Tencent.

Thanks to the marketing muscle of Tencent’s gaming business (just in terms of gaming, Tencent owns or has investments in League of Legends developer Riot Games, Activision Blizzard, Epic Games and Supercell) PUBG quickly became the number one PC game in China, and created the ideal opportunity to grow that audience with a mobile version that could reach the huge non-PC audience. 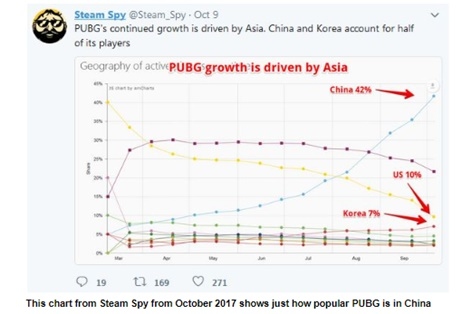 In China and other APAC countries, PC is still the most important gaming platform for ‘hardcore’ games. You can see this in the genesis of battle royale games in general, which are really designed with a mouse and keyboard in mind.

For all the huge mobile appeal of both PUBG and Fortnite, plus the many other battle royale genre games, it’s surprising in that the games are simply not optimised for mobile devices.

As well as difficult controls, these games are graphically intensive too, meaning that they are only really able to run on high-end smartphones.

The games also eschew the typical F2P monetisation design decisions that we have become used to, and which you see in China in many of the extremely popular MOBA and RTS games.

As a way to test the waters whilst licensing the official PUBG game for mobile, Tencent released an ‘unofficial’ battle royale game called Glorious Mission. This quickly became one of the most downloaded games in China towards the end of 2017. 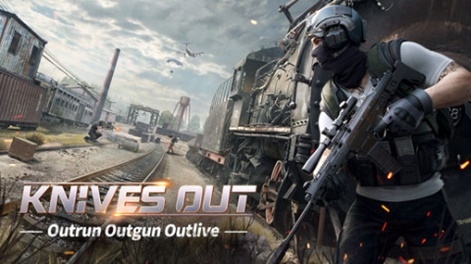 Not to be outdone, China’s other leading games publisher NetEase quickly released three of its own battle royale games in late 2017 – Knives Out, Rules of Survival and Survivor Royale. (Somewhat confusingly, in China Knives Out is called Terminator 2: Judgement Day thanks to a previous licensing arrangement for the movie property of the same name.)

Whilst all three of these games have been launched globally, none has been a significant success beyond Asian gamers.

Rules of Survival remains a top 50 grossing title in China and has been downloaded more than 150 million times. Knives Out has performed even better, becoming a huge success in Japan, which accounts for 96 per cent of all downloads of the game outside of China.

According to data from analyst firm Niko Partners, 75 million Chinese gamers pre-registered for the iOS versions of these games ahead of launch – showing just how popular they are.

It’s interesting to see FPS games – a genre which has long been seen as a very Western – suddenly become a global phenomenon thanks to the competitive twist that ‘battle royale’ has added.

For the publishers of these games, there may be huge download numbers and strong DAU, but when it comes to monetisation, it’s a very different story. Many of these games initially launched without any monetisation, simply as a way to quickly drive installs.

This raises the question of how effectively publishers can monetise the large number of players, when the game genre offers little opportunity to generate revenue beyond cosmetic items and advertising.

Of course, as with any successful game, PUBG has also inspired many other battle royale games. In no particular order, so far this year we have seen the launches in Asia of Last Battleground: Survival by Elex, Black Survival by Archbear, Free Fire: Battlegrounds by Garena, and Grand Battle Royale by GameSpire.

PUBG is currently the most downloaded mobile game worldwide. Whether players in China will flock to play Fortnite instead is the big question.

Whilst Fortnite has rightly dominated the headlines in the West thanks to it’s refreshing approach to cross-platform play and low-pressure monetisation model, PUBG has a significant first-mover advantage.

Plus, much of Fortnite’s popularity has come from its big console player base, which does not exist in China, where PCs and mobiles rule the roost. According to NewZoo, in February 52 per cent of PC gamers in China were playing PUBG, versus only one per cent playing Fortnite.

For Tencent, it’s really a win-win situation, as it has investments in both PUBG publisher Bluehole and Fortnite publisher Epic Games.

We will wait and see which game receives the bulk of Tencent’s immense marketing might, and whether any publisher can turn the massive popularity of battle royale into revenue gold.